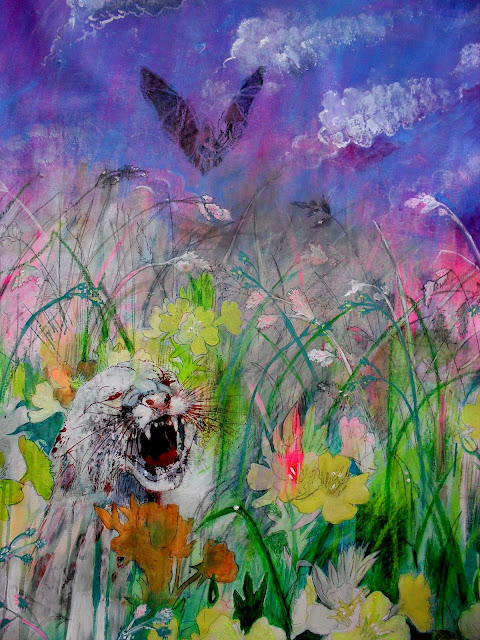 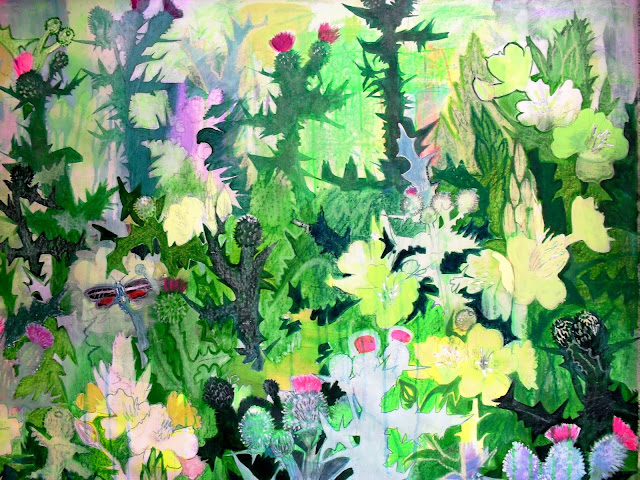 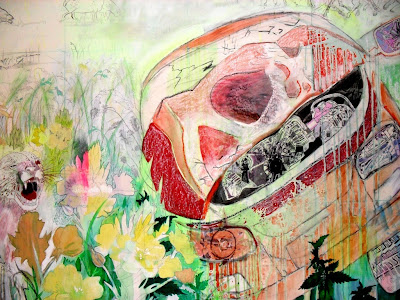 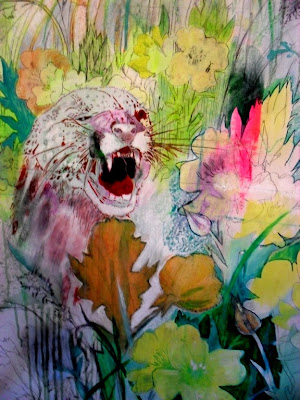 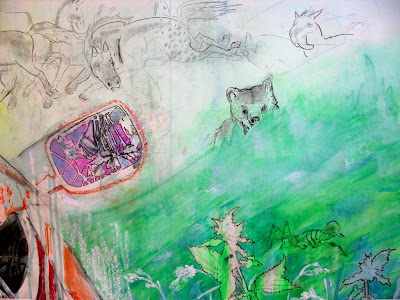 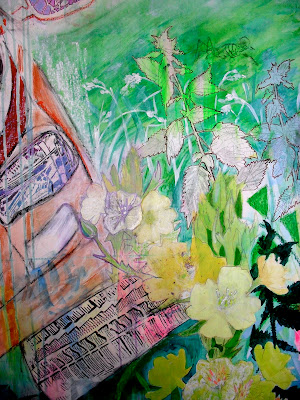 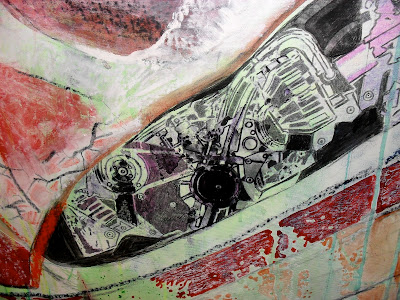 Apocalypse Bubble Car, engine detail
THE PERPETUAL KALEIDOSCOPIC PAINTING:
... Compressing the distance between historic and prehistoric time. Mammoths in Central park, sabretooth tigers in Templehof airport. Breaking down the idea of painting as finite moment:
So I make paintings with an eye to playful destruction:
On canvas, large paintings are created as a cohesive narrative work, then they are cut up, individually mounted on 40X50cm canvas' reassembled as a whole and hung on the wall. The paintings can be hung in original order or presented in a disordered way, inviting the viewer to assemble the story for themselves. The paintings can be puzzles, the paintings can be pro time or anti time. Make your own time. Each piece can be sold individually, the painting can be sold as a whole piece too. For each piece that is sold I re-create the missing segment and replace it back into the painting - an everlasting changing kaleidoscopic painting- I want to share the concept of painting as a self-renewing process, an ongoing interactive growth. As time passes, the nature of the painting changes subtly, eventually it could be an entirely different painting to the one it started out as. Hence we see that time does not limit the painting to existing at one point only- unlike the conventional time-scale in relation to pictures, these works are never finished and continue to react and change in response to YOU- like public access T.V.

RESTORING THE MAGIC OF ANIMALS:

Many of us over-look the fact that until 12 thousand years ago -(a mere blink in the evolutionary eye) Europe was populated by a
megafauna comparable to that of the great plains of Africa. Mammoth, Lion and vast herds of various ungulates inhabited tundra, plain and forest in astounding diversity. These animals were the absolute obsession of our ice-age ancestors, giving everything these people required to survive. Humans absolutely depended on and were deeply connected to the rest of the animal world. The cave paintings of Chauvet and Lascaux in France are testament to this fact. the same powerful and dangerous animals are depicted again and again and again- buffalo, elephants, lions, deer. In particular, humans have had an almost sensuous physical intimacy with such large species as buffalo and elephants(mammoths) for thousands of years- following the herds, knowing individual animals from birth to death. What has happened?
Does the present conservation focus on such
'charismatic megafauna' represent a vestigial element of our ancient relationship with such imposing creatures? Simultaneously magic and everyday, Large animals were the heart of our forbears universe. This situation continued for many thousands of years until, put in oversimplified terms, increasing human population and decreasing game forced people into agriculture. With the domestication of the wild ancestors of such animals as pigs (wild boar), cows (Auroch cattle) and sheep (Mouflon), attitudes towards non-human life encountered a drastic change. No longer were great autonomous beasts seen as beings to be reckoned with. Humans still lived cheek by cheek with other species, sharing food, diseases and living space, (many common human diseases evolved at this time from maladies present in other species) but a breach had come between, and instead of being part of the fabric, western man was now permanently and unalterably shredding it and has been ever since.

The wild is not a perpetually flushing toilet nor an ever filling food-bag- it is an intricate web of other nations and our place within it it, yours and mine, past and future, is what this is about. The glamour. nostalgia and erotica of our animal heritage is what I invite you to explore. Is man a parasite or still a great hunter?

Using a printing method I discovered myself- A process involving acrylic binder and photocopies, enables me to create a level of realism with respects to the details of my paintings that would otherwise be out of my grasp- I use this printing technique on the parts of my paintings that I do not enjoy and have little interest in drawing but the inclusion of which is important in communicating what I want to say- ie, Chain link fences, car engines,furniture, aeroplanes,tennis court lights, headlamps, door handles- These, unlike living plants and beings, are of no interest to me as far as laboriously copying them is concerned- so instead, I print the man made details. There is a sense they are invading eachother, and this contrast between 'natural' and 'manufactured'  within the work interests me deeply. The flowers animals and other components are, as a rule, but not exclusively, hand drawn/painted
I use colours that are super natural- I use neon and acrylic because I want to create a scene that is 6 times more intense than reality- like a night mare or dream, or a in time of great stress, emotion, tension- like when a lion kills. Colours seem brighter at these times and time seems to stand still for us. My challenge is to balance detail with space, saturation with sparsity and energy with stillness- it is a challenge I take on again and again and inevitably fall short of, so I keep trying to capture these times of intensity and stillness. I am always making new trails for myself, painting is like hunting-chasing down a new idea and mounting its head on my wall. 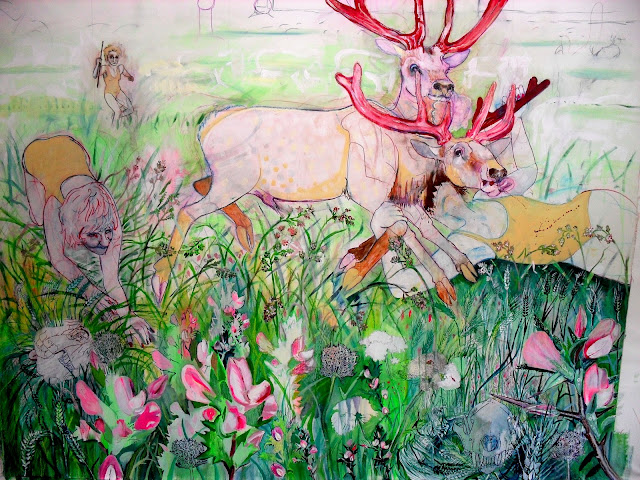